Genre Video for Business: The Horror, the Horror 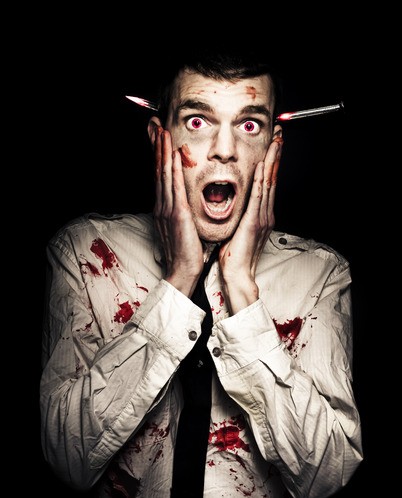 n a world over run by zombie businessmen….sorry I couldn’t resist starting a post that way. Everyone has seen horror films, fantasy movies, and sci-fi pictures and, even if you’re not a fan, you’ve endured them because a loved one or a date dragged you to the theater. To enjoy that genre of film you have to suspend your disbelief at some or all of it. Your logical mind just can’t cotton with gross aliens from outer space or guys from other planets with pointy, green ears or even your garden-variety ghost.

So, I’m going to ask that you suspend your disbelief when I suggest that you can use fictional genres in business video. Your first thoughts might be, “sounds expensive,” or “why in the name of Pete would anyone watch a business thriller?”

But think about it a bit more. How interesting would it be if the new dating website that you’re building had a series of short suspense films à la Alfred Hitchcock or David Fincher (Girl With the Dragon Tattoo and Gone Girl) in which a couple research one another on a hypothetically “badly built” dating website, chat back and forth, and then do what everyone does when they’re looking at going out with a new, potential partner: Google them. And, the video might continue with more online checking, in person snooping/spying, etc., a lot like the research the Girl With the Dragon Tattoo does in that film. And then it would conclude with a shot of a smiling woman sitting with her smartphone fiddling with your new dating website and the audio tag, “maybe there’s an easier way,” and then a shot of her meeting the guy at a restaurant. That’s clearly a lot more interesting than a promo piece that lists the features and benefits of the website.

The cardinal sin in any form of production is “don’t be dull!” You simply don’t want to bore your viewers with a lot of information or data, that while useful will not convey some experience and elicit some emotions. Wit, terror, embarrassment, grief are all examples of real, human feelings that can and should be employed to tell the story of your products and services.

Yeah, I know what you’re thinking… “it’s simply too risky… I might alienate my customers… I might look like a fool.” And we agree that in the absence of a clearly delineated statement of purpose or a value proposition or defined business objectives, the possibility of creating something that misses the mark is very real. But, a well-written piece that’s fun and captures the imagination will not only attract expected viewers, but do well with those who are not in your target market and that’s worth a great deal.

A bloody horror comedy video for your medical supply business, in which zombies keep coming into the emergency department looking for bandages? Sounds like a winner!